With the intent of the Maglev train’s, people got a touch nearer to the others. Maglev is an expensive technology for its installation and maintenance costs. But the money is being pumped in by private actor’s which lessens the burden on the government. The Senate leader from Nevada had made a proposal earlier last year for the MagLev’s. This was only the start of what was yet to come. The proposal had created a lot of buzz around. There have been quite some rumors floating around. One rumor floating around was that the Transit officials in California and Nevada like the idea proposed by some of the private actors in the transport segment. It was said that the train would be traveling at a speed of 125mph. That means it would take less than a couple of hours to reach the destination.
The private actors like the Las Vegas-based DesertXpress Enterprises want an electric-diesel hybrid trains to make the 190-mile trip every 20 minutes. The cost for the project is being estimated at around three billion dollars. They still are not the exact figures of the whole project. But there still are many drawbacks with this plan. The early estimates have suggested that the round-trip tickets may cost anywhere about $110, a price which almost equals the pre-booked flights from Los Angeles to Las Vegas. Most people for sure will prefer the air freight over the costly train tickets. Another problem arising is that the train is supposed to chug off from Victorville terminus which is 80 miles from Los Angeles or Anaheim. Moreover Victorville to the Los Angeles Basin is one of the major congested areas. So, will the commuters travel 80 miles to get on a train to Las Vegas? Another problem arising is that of the estimated Ticket cost per round trip.

Some people are of the view that the existing trains could be speeded up to match the city-center-to-city-center times at a reasonable price. Also the frequency of the existing trains can be increased instead of pumping in so much money for the project. Many people are arguing that the newest European trains could fly off the 288 miles to the coast in almost an hour and that too on the usual rails.

But as of now the project is still at planning and development stages. But sources predict that the project may start by the year 2012 and the train will start operating by the year 2015. So it is up to the government to increase the frequency and the number of the existing trains or to put the MagLevs into commission. With the rising traffic congestions between Los Angeles and Las Vegas in the Interstate 15, this is probably the best solution ahead.

I have been hearing rumors of a high speed train from Los Angeles California out to Las Vegas, Nevada for going on 5 years now. This hi speed train is set to be built in 2010. If the rumors are true it will take approximately 2 hours to reach they Las Vegas strip from L. A. This train will be a huge plus for tourism and should be completed some time in 2013.

I for one can not wait. I would love to hop on a train friday night and be in Vegas ready to party all weekend. I do wonder if they will serve alchol on this party train? 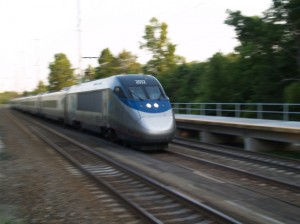